The Cyclones brought in nineteen true freshman this year and while a majority of them will redshirt, a few will make significant contributions during the 2010 season.  The true freshman class played a big part in the 2009 bowl championship season.   Names like Josh Lenz, A.J. Klein, Jake Knott and Jeremy Reeves all played significant minutes.  We expect a similar number of true freshman to play this season. 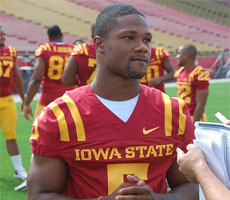 RB Shontrelle Johnson #25 – Shontrelle is a dynamic playmaker that will make an impact as a running back and on special teams.  Alexander Robinson has the #1 RB position locked up, but he shouldn’t have the burden he had last year with three capable backups in Shontrelle, Jeff Woody and James White.  Johnson is the running back that has the skill set most similar to ARob and is a great fit for this offense.

LB Jeremiah George #7 – George is a little undersized at 5-11 and 215 pounds, but Jeremiah has the determination and work ethic to contribute this season.  The ISU defense lacks depth at the linebacker position and for that reason alone, Jeremiah will be thrust in to action.  Jake Knott and A.J. Klein played on special teams and spot duty at linebacker last year and I think you will see a similar role for George this season.

WR Albert Gary #18 – Gary does not have a redshirt year available so there really is know reason not to play him in 2010.  It may be tough for him to break into the deep wide receiver rotation, but based on his highlight film from high school he has game breaking ability.  We could see him being utilized on some slot screens with his ability to make people miss.

P Kirby Van Der Kamp #13 – Kirby is in a fierce battle with Senior Daniel Kuehl for the starting punter position.  It sounds like Kuehl has the edge, but we wouldn’t be surprised to see Kirby some this season.  In a perfect world it would be great if Daniel could win the position outright which would allow Kirby to redshirt this year.

WR Jarvis West #3 – West is undersized at 5-6, 154, but he is a very slippery runner.  The fact that he isn’t listed on the depth chart leads me to believe the staff would like to redshirt him.  If he plays in 2010 it would probably be to provide a spark to the return game.

LB C.J. Morgan #27 – Wally Burnham said in a recent interview that C.J. was the freshman linebacker that was most ready to see the field at linebacker.  With the limited depth at linebacker, Morgan may need to take some snaps as the year goes along.

The next group of players are likely to remain redshirted, but have made some noise.

RB Duran Hollis #1 -Duran a.k.a. Duck has been very impressive as well.  Duck has a different style then the other runners in that he is more of a one cut running back.  The staff likes both he and Shontrelle alot so they would like to redshirt one of them to separate them into different classes.

LB Floyd Mattison#19 – The freshman LB is said to have a freakish skill set.  Once again the lack of depth at linebacker could force Floyd in to action. 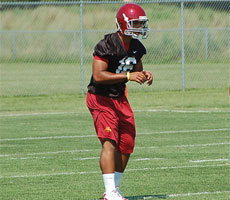 Other freshman likely to remain redshirted that we need to learn more about.

** Note on the Freshman Offensive Lineman – Paul Rhoads plans to redshirt the entire freshman class, but said to mark his words that this group of OL will be a dominating group in the Big 12 in a few years.** 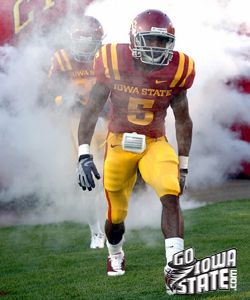