A celebration was held in the Bergstrom Practice Facility in Ames to welcome Coach Paul Rhoads and the Cyclone Football Team home after they went to Nebraska and beat the Cornhuskers. Fans, family, media, and others gathered at the practice field to congratulate Coach Rhoads and his players for the first Cyclones victory in Lincoln since the 1970’s. Coach Paul Rhoads gave a motivational speech and other Cyclone players spoke and supported Rhoads at the rally. After thanking the fans for supporting the team, Coach Rhoads talked about how the team is making improvements everyday and they will play their hearts out every week and prepare day in and day out for upcoming games. The Cyclones are 5-3 in the first season under Paul Rhoads, the five wins are the most in a season since 2005.  The Cyclones play Texas A&M on the road next Saturday. The Cyclones are one win from being bowl eligible and would become bowl eligible with a victory at Texas A&M this week.

Coach Rhoads has had an immediate impact on the Cyclones football program in his first year as head coach. He and Wally Burnham have the Cyclones defense playing out-of-their-mind good, especially against the run, and offensive coordinator Tom Herman has the spread offense hitting on all cylinders and has his players taking care of the football.  So the Cyclones have no doubt earned the welcome home celebration that they got after the upset over Nebraska.  Cyclone fans have shown great support for their Iowa State Cyclones football team all year long. Video of the Welcome Home Celebration

The Cyclone fans welcomed home their Iowa State Cyclones with a celebration at the Bergstrom Indoor Practice Facility to honor the team for their great efforts in the 9-7 upset over the Nebraska Cornhuskers.  Hundreds of fans, family, and others packed into the practice facility to celebrate the upset victory that ended a 30 year losing streak in Lincoln, NE.

Watch Coach Rhoads’ post game interview following the upset victory over Nebraska last Saturday.  Coach Rhoads begins by talking about how big of a win this was for the football program and ISU in general and how this has helped the team grow and improve and gain confidence going forward. Coach Rhoads addresses how special a win this was to get on the road without his starting QB and the no. 1 RB in the Big 12 in Alexander Robinson. On top of that, Coach Rhoads explains that a number of other Cyclones were sick with a stomach bug. He stresses the importance of the team and not the individuals and that they pushed themselves hard and overcame adversity.

Cyclone Players Interviews from Jerome Tiller, Nate Frere, and others

Interviews from the Cyclones football players – Freshman QB Jerome Tiller, Punter Michael Brandtner,  DT Nate Frere and other Cyclones.   Tiller talks about his experience as a starter for the first time in Memorial Stadium, and how the team overcame odds to beat Nebraska. Brandtner talks about his fake punt conversion for a first down that set up the Cyclone touchdown. 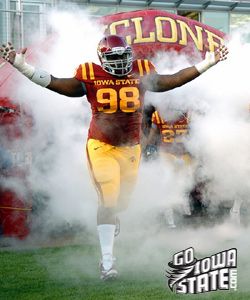