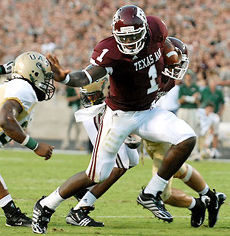 2. The Aggie offensive line clicked for the first time last week allowing just one sack and gaining 321 yards, including 6 TD’s on the ground.

5.  True freshman wide receiver Uzoma Nwachukwu is the top target for Johnson hauling in 22 passes for 463 yards and 6 touchdowns.

6.  The one area on defense in which Texas A&M excels is pressuring the quarterback.  Von Miller leads the nation with 12.5 sacks and the team is second nationally with 21 sacks.

7.  The defense gave up 456 yards passing to Texas Tech last week, but they were able to overcome it by forcing 5 turnovers. 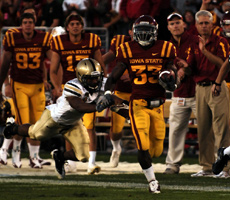 Iowa State hopes to have the Big Twelves leading rusher, Alexander Robinson, back in the lineup Saturday

1. Iowa State is one of three FBS squads to have already won at least 3 more games than it did all of last season.

3. Alexander Robinson, who missed the game last week with a groin injury, leads the Big 12 in rushing with 105 yards/game.  ARob reportedly has been running at practice this week and should make the start against the Aggies.

4. Jesse Smith was named the Walter Camp and Big 12 Defensive Player of the Week for his performance in the upset over Nebraska.  Smith leads the conference this season with 77 tackles.

5. NB Ter’ran Benton will miss at least a couple weeks with a leg fracture.  S James Smith will have to sit out the first half of this game after being ejected last week.  Zac Sandvig will most likely start at safety and Michael O’Connell will take over for Benton at nickelback.

6. Michael Brandtner was named Big 12 Special Teams Player of the Week for his great punting and execution of a fake punt for 20 yards against the Huskers.  Brandtner and the punt unit lead the conference this year with a 40.7 net punting average.

8.  The Offensive Line is the strength of the team.  The Cyclones lead the nation in sacks allowed with just 4 in 8 games and lead the Big 12 in rushing with 204 yards each game.

9.  ISU is near the bottom of the conference in passing offense with 183 yards/game.  Starting QB Austen Arnaud is expected to return to the lineup on Saturday after missing last week with a bruised throwing hand.  Freshman Jerome Tiller would get the nod again if Arnaud can’t go. 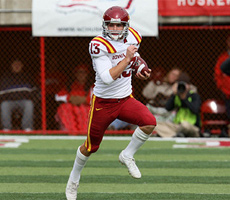 Iowa State needs a big play on special teams this week - Michael Brandtner made the big play against Nebraska.

1. Bend But Don’t Break Defense – Texas A&M is going to move the ball, but the Cyclone defense needs to keep the Aggie offense out of the end zone.  Iowa State’s defense has stiffened in the red zone this year and they were particularly good last week forcing 4 red zone turnovers.  Repeating that performance is probably too much to ask, but if they can limit A&M to field goal attempts instead of touchdowns they can leave Kyle Field with a win.

2. Healthy Offensive Backfield– QB Jerome Tiller and RB Jeremiah Schwartz did an excellent job of carrying out the game plan in the victory at Lincoln.  However, Iowa State will need more than 9 points to beat Texas A&M.  Getting Arnaud and Robinson back in the line-up is important this week.  A-Rob is a difference maker in ISU’s offense and Arnaud was coming on strong before injuring his hand against Baylor.

3. Big Play on Special Teams – Special teams have played a huge role in the last two victories.  The punt block against Baylor sealed the victory and the fake punt at Nebraska set up the winning touchdown.  Which special teams unit will come up big this week?

1. Kelechi Osemele/Scott Haughton – The Aggies are going to try to put some heat on the quarterback.  The Iowa State tackles will have their hands full with JACK (DE/LB) Von Miller and the A&M rush.  The offensive line has done an extraordinary job of keeping #4’s  jersey clean this year.  If they can protect Arnaud again this week Iowa State might have a happy post-game locker room again Saturday.

2. Jesse Smith – Iowa State needs to make Texas A&M one dimensional.  Jerrod Johnson is going to hit on some throws, but if the Aggies get the running game going like they did against Tech, the game is over.  Jesse Smith  is the best tackler on the team and the leader of the defense.  Smith and his teammates need to fill run gaps and tackle well to slow down the A&M rushing attack.

3. Austen Arnaud – The Aggie pass defense has been very bad this year, surrendering 259 yards through the air each week.  The Red Raiders torched the young secondary for 456 yards.  After missing last week, Austen will be itching to get in there this week and hopefully he will pick up where he left off against Baylor throwing for 160 yards in the first half.  Look for Arnaud to spread the ball around to several receivers in Tom Herman’s offense.

The Cyclones are riding high after winning on the road at Nebraska for the first time in more than 30 years.  I am a little worried about a let down coming off the monumental win.  The Cyclones have several key players battling injury and illness, so it will be interesting to see who plays on Saturday.  It is another tough test for Coach Paul Rhoads and his resilient Cyclone football team.

Which Texas A&M team shows up?  The team that beat Tech 52-30 on the road last week or the one that was embarrassed at Kansas State 62-14 two weeks ago.  It is has been an up-and-down year for the Ags, which makes this game very difficult to predict.

The two teams combined for almost 1,100 yards and 84 points in A&M’s 49-35 win in Ames last year.  I don’t anticipate a repeat performance, but both teams will put points on the board.  I expect Austen Arnaud and Alexander Robinson to play this week, and if they do, I give the edge to the Cyclones.  Arnaud will have his best game of the year and the defense will do just enough to get a victory. 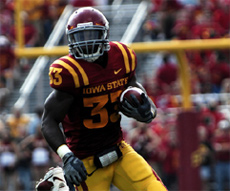