The Aggies top rated offense was too much for a tired and beat up Cyclone defense.  Texas A&M never punted and racked up 501 yards of total offense and had 31 first downs.  QB Jerrod Johnson was 23-28 for 234 yards and three scores, Johnson also ran for a touchdown.

The Cyclone offense had opportunities to put points on the board, but didn’t execute well on the Aggies side of the field.  Jerome Tiller threw two interceptions, Grant Mahoney missed a field goal and ISU didn’t convert on a key 4th down opportunity in the first half.  Josh Lenz had his best day in an Iowa State uniform with 7 catches for 63 yards and kick returns of 27 and 39 yards.

Iowa State drops to 5-4 overall and 2-3 in the Big 12.  ISU returns home to take on 18th ranked Oklahoma State this Saturday at 2:30 P.M.  The game will be televised regionally by ABC. 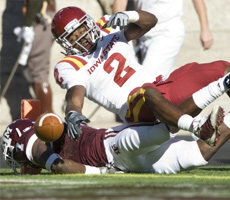 1.  Alexander Robinson made the start and was able to run effectively carrying 20 times for 76 yards.

4.  RB Bo Williams made his debut on Saturday and had the big play, 44 yard run, on Iowa State’s only touchdown drive.

5.  The Cyclones managed to rush the ball well despite playing without two key lineman for most of the game, Reggie Stephens (appendectomy – out) and Ben Lamaak (illness – played less than 50% of the snaps).  ISU had 34 carries for 169 yards  (5 yds/carry)

7.  James Smith had 9 tackles and a forced fumble in under two quarters of play.  Smith had to sit out the first half on suspension. 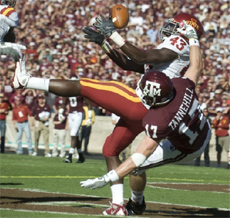 The Iowa State defense had opportunities, but couldn't come up with the big play when they needed it - Photo Courtesy of The Eagle (Stuart Villanueva)

2.  Alexander Robinson was shut down on 4th and short in the second quarter deep in Aggie territory.  ARob ran out of Clone (Wildcat) formation against a 10 man front.

4.  Paul Rhoads admitted the team was an exhausted/tired football team, hopefully the home game this Saturday is just what they need.

5.  The game was not on TV.  So far all I have seen is the highlights on the Paul Rhoads show so it is hard to get too detailed in the analysis. 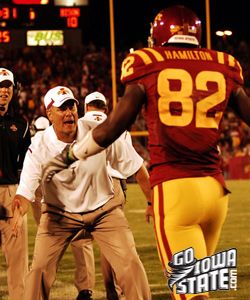