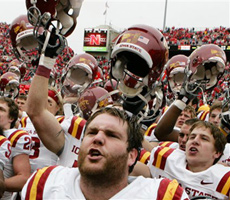 The Iowa State Cyclones did the unthinkable and beat the Nebraska Cornhuskers on the road without top offensive players Alexander Robinson and Austen Arnaud.  The 9-7 Cyclones victory was the first road win at Nebraska since 1977.  The Iowa State win also ends a 14 game Big 12 conference road losing streak.  Robinson and Arnaud were expected to play, but injuries in last weeks win over Baylor kept both of them out of this game.

The Cyclone defense caused an amazing 8 turnovers while the offense played error free football.  Jesse Smith led the Cyclones with 12 tackles, a forced fumble and a victory clinching interception with 1:31 to play.  Freshman QB Jerome Tiller, who made the first start of his career, hit Jake Williams on a 47 yard TD pass in the second quarter that proved to be the winning score. 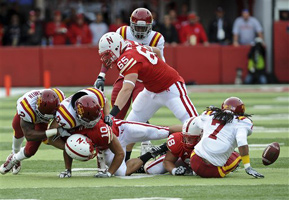 3.  The punt fake was perfectly executed and changed the momentum of the game.  Iowa State was trailing at the time 7-3 with 7 minutes remaining in the second quarter.  The Cyclones were facing 4th and 5 at their own 33 when Michael Brandtner faked the punt and scampered around left end for 20 yards and a first down

4.  Quick Strike – on the very next play Jerome Tiller went deep to Jake Williams in the end zone 47 yards and a touchdown.  I have always admired how good teams take a shot at the end zone after a big special teams play or turnover.  It is great to see that Iowa State is one of those teams now.

5.  Two more streaks snapped – Big 12 road losing streak ends at 14 games and first win at Nebraska since 1977.  I think all of the long losing streaks are officially over – thank you Paul Rhoads!

6.  The play of the safeties was tremendous – David Sims, James Smith and Michael O’Connell combined for 18 tackles, 2 forced fumbles, 4 fumble recoveries and 2 interceptions.

7.  The coaching staff deserves kudos again.  No ARob.  No Arnaud.  Players playing sick.  Ter’ran Benton breaks his leg.  Paul Rhoads and the coaching staff have the players believing and they are putting them in position to win ball games. 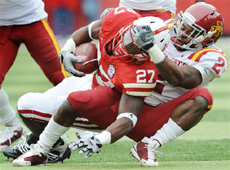 James Smith played a great game, but was ejected in the second half

1.  The kicking game was a huge let down again today, this unit has struggled in all 4 Big 12 games.  It seemed like it was the protection today, but the coaching staff would be a better judge of that. Suh broke through the line on the blocked PAT and field goal, but it did seem like the ball came out low on both.  On the bright side it was good to see Grant Mahoney make the 52 yarder.  Maybe the Cyclones should just kick their extra points from the 50.

2.  Ter’ran Benton broke his leg and will likely miss the rest of the season.  Ter’ran has played really well at the nickel position and will be missed.

3.  Alexander Robinson and Austen Arnaud both unable to play.  You got a think with a healthy ARob and Austen this game is a little more lopsided, assuming we still get all of the turnovers.  The good news is both are expected to play at Texas A&M next week.

4.  James Smith was ejected for allegedly throwing a punch – per league rules Smith will have to sit out the first half next week as well.

6.  Replays –  Way too many calls from the booth on plays that were not really that close.