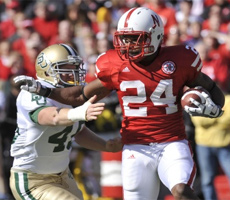 Niles Paul has made some big plays the last two weeks (some good, some bad)

1.  Nebraska has held their last 5 opponents to less than 300 yards of total offense

2. The Cornhuskers will make a game time decision on their quarterback.  Junior Zac Lee has been the starter, however he was replaced last week with freshman Cody Green.  Green didn’t do anything to play himself in to the role of starting QB.  We think Zac Lee will be the starter, but their is a good chance we will seem them both.

3. Roy Helu Jr. has a banged up shoulder and has been wearing the no contact jersey in practice this week.  If Helu can’t go Marcus Mendoza and Austin Jones will get carries and don’t be surprised to see true freshman Dontrayevous Robinson who had his redshirt pulled last week.

6.  Ndamukong Suh and Jared Crick anchor the defensive line.  Suh has 3 sacks and 7.5 TFL on the season.

7. The offense could only muster 285 yards last week against Tech.  The Huskers also had 12 penalties for 95 yards and lost the turnover battle 2-0.

8. The defense played well against the Red Raiders in the loss, they held TT to 259 yards of total offense (263 yards below their average) 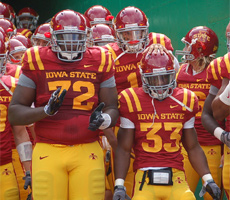 Kelechi Osemele and the offensive line need to open up some holes for Alexander Robinson, Austen Arnaud and the Cyclone running game

4. Austen Arnaud is really starting to get comfortable in Tom Herman’s offense.  Arnaud left the game last week with a bruised hand, but all indications are Arnaud will start this Saturday.  If Austen is unable to play Jerome Tiller would get his first career start in a raucous environment.

5. Over the last two weeks the players have really started buying in to this coaching staff and the results are showing up on the field.  Guys are accepting their roles and putting in the extra time that is needed to be successful (film room, tackling drills, etc.)

6.  Alexander Robinson left the game early against Baylor after aggravating his groin injury.  A-Rob has played in every game since the original injury occurred, but another back will need to step up against Nebraska.  Beau Blankenship had climbed to the #2 spot last week before a leg injury kept him out of last weeks contest.  Jeremiah Schwartz looked good last week and will most likely get carries again this week.  Will Bo Williams see his first action?

8.  Iowa State is 2nd in the Big 12 and 5th in the country in net punting – led by the impressive punting of Senior Michael Brandtner

1. Run the Football – Iowa State leads the Big 12 in rushing and have rushed for more than 200 yards in 6 of their 7 games this year (190 against Iowa).  Nebraska is third in the Big 12 in stopping the rush and have given up less than 100 yards rushing against their best competition (Virginia Tech 86, Missour1 91, Texas Tech 25).  The Cyclones can win this game if they can run the ball.

2. Flawless Kicking Game – Iowa State lost to Kansas and Kansas State in part because they couldn’t execute in the kicking game and they were able to overcome 3 missed field goals last week in the win over Baylor.  When you play in Lincoln there is no margin for error, ISU must be perfect kicking the football this week to win.

4. Pass Defense – The Cyclone defense did a much better job last week of getting pressure on the quarterback and the secondary tightened up their coverage as well.  ISU must continue to improve this week as the Huskers can throw the football.

1. Reggie Stephens and the ISU OL – Stephens will be matched up with Suh for much of the game.  It will be a great opportunity for Reggie to showcase his talent to NFL scouts.  The offensive line must win the battle in the trenches against a talented Nebraska DL.

2. Grant Mahoney – Grant is a very good kicker that is going through a slump – the slump needs to end this week.

3. David Sims – Sims has been quiet for a few weeks – maybe he can breakout again against the Huskers.

I was very impressed with the Cyclones coaching staff last week against Baylor.  It was the most prepared I have seen an Iowa State football team in recent memory.  Tom Herman had a great game plan and made some nice in-game adjustments as the Cyclones moved the ball up and down the field.  The defense led by Wally Burnham made huge progress in one week in pass coverage.  The decline of the Cornhuskers is being over exaggerated after the loss to Texas Tech.  The defense is playing as well as any team in the Big 12 and as everyone knows Defense wins Championships.  Iowa State has an opportunity to hang around in this game if they can play mistake free football, make some big plays on special teams and force turnovers.  The Cyclones will run the ball well on Nebraska and will gain some respect around the league, but the Huskers win the football game. 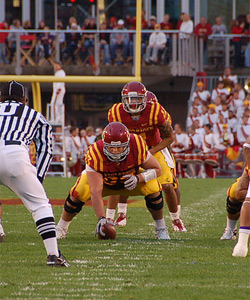