We have a serious shake up at the top of the Big 12 Power Rankings this week.  The top three contenders for the Big 12 North title all lost this week (Nebraska, Kansas, Missouri).  The Big 12 South now dominates the rankings holding the top 4 spots.  Oklahoma State moved from 5 to 2 and Texas Tech climbed up 4 spots from 7 to 3.  Texas A&M was bludgeoned by Kansas State, dropping them to the bottom of the rankings.  Colorado gets out of the basement for the first time jumping to the 10 spot with their victory over 17th ranked Kansas.  Texas remains on top after squeaking out a victory over the rival Sooners.

Hubert Anyiam had his best game as a Cowboy against Missouri

2. Oklahoma State Cowboys – Overall (5-1) Big 12 (2-0) – BCS Ranking 14
Last week: (16) Oklahoma State 33 Missouri 17
Hubert Anyiam had a break out performance against the Tigers filling in for the suspended Dez Bryant.  The Cowboys continue to find a way to win without two of their best players (Kendall Hunter and Bryant).
Up next: (14) Oklahoma State at Baylor

5. Nebraska Cornhuskers – Overall (4-2) Big 12 (1-1)
Last week: Texas Tech 31 (15) Nebraska 10
Nebraska fans booed their team off the field at halftime.  The defense is good, but the offense needs to get things going if they are going to win the Big 12 North.
Up next: Iowa State at Nebraska

6. Kansas Jayhawks – Overall (5-1) Big 12 (1-1) – BCS Ranking 25
Last week: Colorado 34 (17) Kansas 30
The defense has struggled against two below average Big 12 offenses (Iowa State and Colorado). Tougher match ups are ahead starting this week when the Sooners come to town.
Up next: Oklahoma at (25) Kansas

7. Missouri Tigers – Overall (4-2) Big 12 (0-2)
Last week: (16) Oklahoma State 33 Missouri 17
The Tigers lost the turnover battle 4 to 0 in the loss to Oklahoma State, three of the turnovers were Blaine Gabbert interceptions.  Mizzou will have to reverse that trend to have a shot against the Longhorns.
Up next: (3) Texas at Missouri

10. Colorado Buffaloes – Overall (2-4) Big 12 (1-1)
Last week: Colorado 34 (17)Kansas 30
Colorado held on for a nice victory over 17th ranked Kansas. The change at quarterback proved effective, at least for one week. The Buffs need a win this week at Kansas State if they are going to turn the season around.
Up next: Colorado at Kansas State 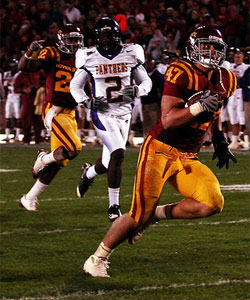