« Previous Next »
Browse: Home / From the Middle – Week 11 Analysis

From the Middle – Week 11 Analysis

The Oklahoma State Cowboys rolled into Ames last week and showed why they are one of the best teams in the Big 12.  They completely dominated the Cyclones on both sides of the ball and gave little doubt as to who the best team on the field was last Saturday.  The Cyclones will have to regroup this week and work on a number of areas to get a win out of the last two games of the year.

Here are some areas where the Cyclones need to improve to have a chance at being bowl eligible this season. 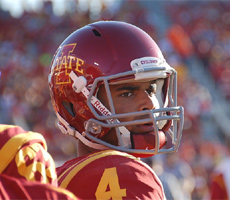 Defense Needs to Stiffen Up

After a strong showing against Nebraska, the Cyclone defense has had two lackluster performances in a row.  Last week against the Cowboys, the Cyclones gave up 331 yards on the ground.  This was the most yards given up on the ground all year by the defense, the Cyclone defense gave up an average of 6.1 yards per carry.  They will need to significantly improve this part of their game over the next two weeks if they want to have a chance of winning.

With the return of Austen Arnaud to the line-up, we were hoping there would be a spark in the performance of the offense.  Unfortunately, the rust of being off for two weeks showed as Austen completed just 14 of 27 passes for 188 yards with 3 interceptions.  In addition to the challenges throwing the ball, Oklahoma State completely shut down the Iowa State running game.  The Cyclones were only able to gain 54 yards on 26 attempts for a disappointing 2.1 yard average.  The Cyclones best game on offense came in the Big 12 opener against Kansas, the offense will need to return to that level of play if they want an opportunity to stay in the next two games.

Last week was really the first time that ISU had challenges in the punting game as Mike Brandtner had been as consistent as any Cyclone this season.  Last week however, Mike seemed to have a very off his game as he had a disappointing punt average of just 32.5 yards in the game.  If we are not able to move the ball offensively over the next few weeks, Mike will need to give the defense good field position.

Keys to Victory against Colorado 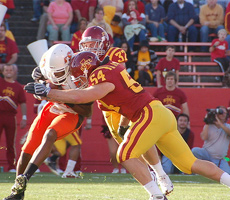 1)      Defense needs to do a better job at controlling the line of scrimmage.  They are giving up too many yards on the ground and the defense is not giving themselves opportunities for 3rd and long situations.  This all starts up front with the defensive line.

2)      Need the turnover ratio to be positive.  Need some takeaways on the defensive side of the ball and no interceptions or fumbles on offense.  We have a chance to win if we can control this portion of the game.

3)      Need a strong showing out of the punting and kicking games.

4)      Need the seniors to step up for their final game at Jack Trice Stadium!

Well, that is it for this week!  Up next a breakdown of the Colorado game!