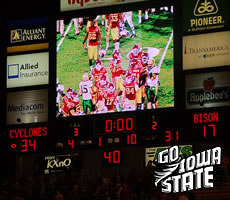 Ames, IA – While there were some mishaps along the way, Coach Rhoads has a lot to be happy about in his first game as the new head coach; his Cyclones defeated North Dakota State 34-17 at Jack Trice Stadium. For a quick look at the box score check out the ESPN’s Boxscore. The team was victorious in Coach Rhoads’ debut as head coach, and also brought an end to a 10 game losing streak that concluded last season. While the Iowa State Cyclones did show a lot of promise, there were a lot of mistakes and questions to be answered particularly on the defensive side of the ball. Iowa State Cyclones Trump North Dakota State

The defense gave up a staggering 223 yards in the first half and a game total of 388 yards. That is a definite sore spot for the Cyclones as North Dakota State’s offense has no where near the caliber of play as the rest of the Big 12 teams that the Cyclones will see.

Coach Rhoads had expressed some fear about his defense’s tackling abilities coming into the game and those fears proved to be a problem, as the defense looked shaky in the tackling department. The defense had been run over for a whopping 210 total yards of rushing, with 141 yards rushing against them in the first half. This is something Coach Rhoads will have to stress to the defense for the rest of the season if they want any chance at all of staying in football games. On the up side, the defense only allowed for 178 yards through the air and caused 2 turnovers, one pick and one fumble recovery. They also played a much better second half of defensive football, giving up only 7 points and 165 yards total. Linebacker Jesse Smith had a terrific game, posting a career high 15 tackles and a forced fumble. The huge surprise came with the defenses penalties, as they didn’t commit a single penalty until the 1:31 mark in the fourth quarter, and that flag came on special teams. While the defense did give up 17 points to a much inferior team, the offense looked pretty good, scoring 34 points in their first game with a new offensive coordinator. Tom Herman and the Cyclone offense racked up a total of 442 yards on the NDSU defense and looked very impressive moving the chains. Quarterback Austen Arnaud looked strong in his debut as the starter, throwing for 227 yards and a pair of touchdowns. He also added another touchdown on the ground, when he scrambled five yards into the end zone. Senior wide out Marquis Hamilton looked good as he caught 4 balls for 97 yards with two touchdowns on the night. His long was a 42 yard bomb to the back of the end zone for 6, and marked his second two touchdown game in his career. Hats off to ya kid. On the ground, Cyclones got a lot of help from both Austen Arnaud, who ran for 78 yards and a touchdown, and tailback Alexander Robinson added 83 yards rushing on 16 carries and an 18 yard scramble for a touchdown. He truly carried the offense in the first half, as he ran for 75 yards and a score. Another bright spot for the offense that really hasn’t been there in the past few seasons was the kicking efforts of Grant Mahoney. Mahoney was a perfect 4-4 on PATs and 2-3 on field goals with a career long boot of 50 yards in the third quarter. This field goal marked the longest field goal for the team since 2006, and the 13th longest in school history. Austen Didn't Have His Best Game, But Still Made Some Great Plays

How It All Went Down

The Cyclones got off to a fast start, as they took their opening drive 81 yards and capped it off with an 18 yard run by Robinson for the score. Iowa State added to their lead early in the second quarter when they marched 80 yards for a touchdown to bump their lead to 14-0. The half time score was 17-10 in favor of ISU.

On the opening drive of the second half, NDSU’s Quarterback Nick Mertens was picked off by David Sims after the pass was tipped at the line of scrimmage. The Cyclones wasted no time cashing in on the turnover, as the marched 65 yards in 6 plays that was capped off with a 39 yard strike to Marquis Hamilton to put a 24-10 choke hold on NDSU.

NDSU struck back less than five minutes later to pull with in 7 points. The NDSU touchdown was followed up by a huge 50 yard field goal by Iowa State’s kicker Grant Mahoney. Iowa State’s Austen Arnaud hooked up for another long 42 yard touchdown pass to Hamilton with 10 minutes left in the fourth quarter to bring the lead to 34-17.

For complete run down of the scoring, check out this great Cyclones.com game summary.  Also, check out ESPN’s Boxscore and the CYCLONES CLUBHOUSE for more information on the game and Iowa State Cyclone football news.

While the win did come against a weak team from North Dakota State, it is a good start for Coach Rhoads and will help the team build some much needed confidence going into next week where they will face arch rival Iowa Hawkeyes. The Cyclones play host to the Hawkeyes in the Cy-Hawk series on Sept. 12, kickoff is at 11 a.m. so be ready for an early tail gate Cyclone fans! Marquis Hamilton Had A Breakout Game For The Cyclones 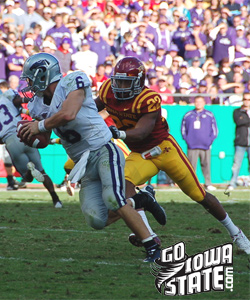