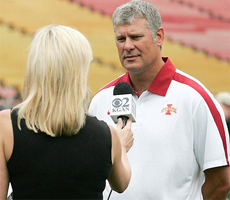 Iowa State held football media day last Thursday at Jack Trice Stadium in Ames, Iowa.  The Cyclones who were 5-7 last season hope to rebound and make it back to a bowl game in 2011.  A challenging schedule again awaits Iowa State, some experts feel that it is the toughest in the nation.

Photographers Reese Strickland and Steve Fry were on hand to get photos of the 2011 Iowa State Cyclones.