Cyclones Have Tough Test Against Army 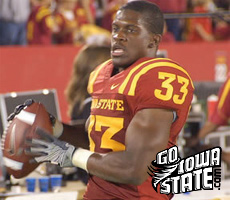 The Iowa State Cyclones‘ morale is high coming off their big road win last week against Kent State and they have regained their confidence after the beat down that the Hawkeyes put on the Cyclones two weeks ago. They look to make a statement this week when Army comes into Ames this Saturday. Iowa State plays host to a 2-1 Army team that has looked mediocre so far this year. The Cyclones are 2-1 now and feel that their offense is finding its rhythm.

The spread offense the Cyclones run is really starting to come together under offensive coordinator Tom Herman. The Cyclone spread has surprisingly opened up the running game for Alexander Robinson and has improved the rushing  more so than it has the passing game. In fact, Iowa State’s rushing numbers are actually higher than the passing yardage through the first three games. The Cyclones have rushed for 628 yards and passed for 521 yards; showing just how much success the rushing game has had in the spread formation. The Cyclones rush game will have to show up on Saturday if the ‘Clones want a shot at winning the ball game.

The main concern for the defense is stopping the run. The Cyclones defense must slow down the rushing attack of the Army Black Knights. Army is 7th in the nation in rushing yards per game and a horrible 120th in passing. Army rushes for an average of 257 yards on the ground each game, and they only pass for 71 on average per game. The Cyclones have looked pretty good against the passing attack but have been suspect to the rushing attack, as they give up roughly 150 yards a game on the ground. Army relies solely on their run game, so the Cyclones need to load pu the box to stop the running game and force Army to try and beat them through the air.

This will be a great game and will be a true battle in the trenches, as the key to winning this game lies in who can have more success running the ball and stopping the rush. The Cyclones will shut down the Army pass game, but can they stop an Army run game that puts up 257 yards a game? Austen Arnaud has been inconsistent lately but if he can manage a game like he did last week at Kent State, that should be enough.

I expect to see Arnaud throw for 200 yards and two touchdowns and an interception, and add 40 yards on the ground. WR Marquis Hamilton will have a game more like the one he had in week one, and should have 100 yards and a touchdown. The Black Knights from Army will have success running the ball and I can see them putting up 200 yards or more rushing. Iowa State’s secondary will shut down the practically non-existent passing game of Army. The real question is what will Alexander Robinson do to the Army defensive front line? The spread offense of the Cyclones will create enough space that he will run for 100 yards and a score. I have the Iowa State Cyclones winning this one, but not as easily as last week against Kent State. 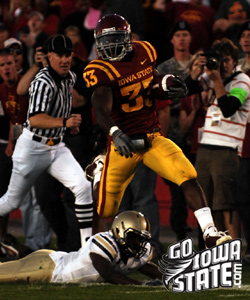