« Previous Next »
Browse: Home / Rant About The Referees (Part II)

Rant About The Referees (Part II)

– I hope I don’t have to go on about this all season. Here’s my gripe… Are you telling me that the multi-million (billion) dollar industry that is the NCAA can’t come up with 7 guys to referee a game? First let me say ISU’s game last weekend was the worst officiated game I think I’ve ever seen at the college level (Vikings in Lambeau a couple years ago with 8 admitted blown calls is the worst NFL game). How these clowns actually keep their jobs is beyond me. And how they miss and blow so many calls is beyond me too.

There is really only two conclusions to make, either they are corrupt or they are incompetent. I’m not saying they are corrupt, I’m just saying well, that’s what it looked like it. I’ll explain further in a minute. Yeah, I know that’s a pretty harsh accusation to make, but I’m not the first to make it. Check out what Baylor assistant coach Bill Bradley had to say about the same officials.

So if you think there is no way they could be corrupt, then they are for sure incompetent and don’t deserve to be on a college football field. These officials (Gerald Wright, Kevin Matthews, Tim Podraza, G. Arredondo, Terry White, Tom Beller and Craig Falkner) need to be the example once and for all that the NCAA needs a better system to evaluate their refs and put people out there that have respect for the game and call it the way it should be called. These officials weren’t even close.

Calls of the Game

Rather than keep rambling on, I’ll let the pictures do the talking. Here are some shots from the game with my take on things. Below is one of the ‘controversial’ plays in which the UNLV defender is trying to take home a souvenier…Jon Davis’ jersey! 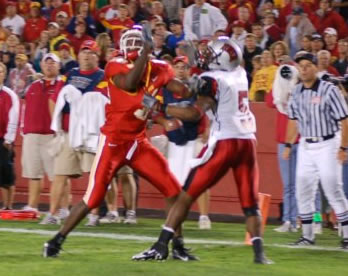 All I want is for each team to have a fair shot at winning. The refs shouldn’t even be mentioned or noticed. I know they are all human like us, but if I did my job like the refs this past Saturday night, I’d be out of a job. As Scott also mentioned, having officials from the same conference as a team call a game is ridiculous. Why do they do it then? My guess it saves the NCAA money on travel. I won’t stop harping until something is done. Join the fight and go Clones!

Here’s to the game being decided by the players today and not the refs! Gulp. 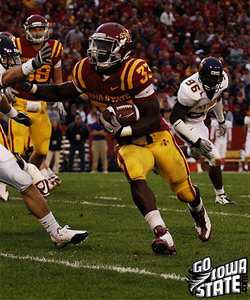