After the University of Iowa’s weak performance against UNI last week, and the 34-17 victory over NDSU in Iowa State’s home opener, Cyclone fans are very optimistic going into Saturday’s showdown with the Hawks. This is the game all Iowa fans wait for, whether you’re a Cyclone or a Hawkeye, and a lot of pride rides on the outcome of this rivalry. Who will be the best college football team in the state of Iowa for 2009? The answer for most fans lies in the outcome of this game. The Iowa State Cyclones play host to the Hawkeyes this Saturday at 11 am in what should be a very entertaining game. This game could really go either way for a number of reasons. Below is list of advantages for each squad:

The Cyclones Win If…

I personally like the Cyclones’ chance in this one. Here are a few reasons why. The Cyclones will win because…

The Hawkeyes Win If…

A lot of Hawkeyes disagree with me and going to school in Iowa means that the Hawk fans are gonna let you know how great their Hawkeyes are. Here are a few reasons why the Cyclones may have trouble with the Hawks. The Hawks will win because…

And The Winner Is…

The Cyclone Fans Will Play A Crucial Role In Saturday's Game. Wear Your Cardinal Cyclones Gear and Come Support The Team!

While the Cyclones are sure to be underdogs (+7.5), I truly think they can win this game. The Clones play great at home (or the Hawks play terrible at ISU) and their offense is looking stronger than ever. ISU has won the last two meetings at home in Ames and will look to extend that streak.

Cyclone Nation will no question have to bring a lot of energy and support into Jack Trice Stadium, and based on the last few years it should help the Cyclones immensely. I think this will be a shootout as both teams will rely on their offenses to move the ball. Nevertheless, this game will be a classic, as almost every Iowa State/ Iowa game has proved to be.

Ok folks, with that said, bring your Cyclone gear, and come out and support your Iowa State Cyclones as they look to beat down the Hawkeyes! Remember, Saturday is Color It Cardinal Day so come out and show your school pride by wearing Cardinal to the tailgate and game! LETS GO STATE!

Nick: I expect this to be an awesome game. I think both offenses will be successful, Iowa with their run game and Iowa State with their pass game. The home crowd and atmosphere at Iowa State will prove to be the edge here and the Iowa State Cyclones will come out victorious. And no the Hawks won’t get so lucky with blocked field goals or some crap like that against the Cyclones! GO STATE!

Scott: The home team has won the last five games in the Cy-Hawk series.  I predicted an Iowa State victory before the season started and I haven’t seen anything to make me change my mind.  Iowa fans will be down in the dumps after this loss and they face a tough Arizona team next week, but the good news is the Big 10 schedule is just around the corner. 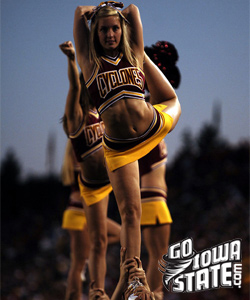