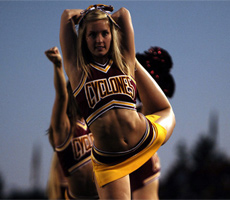 The Iowa State cheerleaders had plenty to cheer about last Saturday

Ames, IA – It was an absolutely great day Saturday, the festivities surrounding the game were awesome and so was the game.  The Iowa State Cyclones defeated the Black Knights from Army 31-10. Alexander Robinson and Austen Arnaud led the Cyclone offense, Josh Lenz and Michael Brandtner shined on special teams and the ISU defense did a very good job of shutting down Army’s triple option attack. Photographer Todd Meyer did a great job of catching all the action including the flyover before the game, the Lil Clone kids forming the player tunnel and some tremendous play on the field.

Todd Meyer’s photo gallery can be found below.