Cyclone Football and the Origin of Cy

Originally, Iowa State was originally known as the Iowa Agricultural College, and athletic teams were called the “Cardinals”. It wasn’t until 1895 that the team name was changed to the Cyclones. It was changed after a game played on Sept. 29, 1895, when the Cyclones under Coach Pop Warner destroyed the Northwestern Wildcats 36- 0.  The name was inspired by a very active “cyclone” season, and an article written the next day by the Chicago Tribune was headlined with this: “Struck by a Cyclone”, and went on to say that Northwestern might as well have played an Iowa Cyclone than the team it met yesterday. This forever changed the Iowa State team name to the Cyclones. 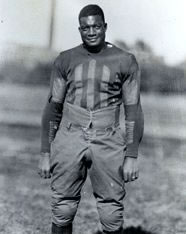 Jack Trice was Iowa State’s first African American athlete to play football for the Cyclones. He was also the only Iowa State athlete to die from injuries he sustained during a football game. On October 6, 1923, Iowa State played the University of Minnesota and it marked the first football game as a Cyclone for Jack Trice. Jack Trice suffered a broken collar bone early in the game but continued to play. Shortly after, he was trampled by a group of Minnesota players and was seriously injured. Jack Trice died three days later.

Coach Rhoads was hired on December 20, 2008 to return to the Iowa State Cyclones as their new  head coach. Before taking the head coaching job at Iowa State, he was the defensive coordinator for the Auburn Tigers.  Coach Rhoads previously was an assistant coach at Iowa State in the late nineties and grew up only 20 miles from the Jack Trice Stadium. Coach Rhoads signed a 5 year deal worth a reported $5.75 million with incentives. In his first four games, Coach Rhoads has led the Cyclones to an impressive 3-1 start with wins over North Dakota State University, Kent State, and Army. 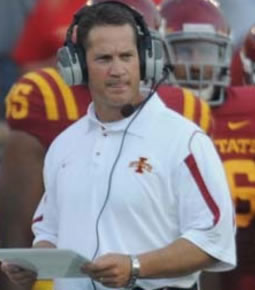 After long time head coach Dan McCarney stepped down after the 2006 season, Iowa State athletic director Jamie Pollard hired Gene Chizik from the Auburn Tigers coaching staff. He was the defensive coordinator for the Tigers and was very successful with the Auburn program. Chizik coached the Cyclones for two seasons and amassed a total record of 5-19 over the 2007-2008 seasons. The highlight of his short career at Iowa State came in 2007 against the Iowa Hawkeyes when the Cyclones upset their rivals 15-13, and then won back to back games against Kansas State and Colorado. The Cyclones finished the 2007 season with a record of 3-9. In 2008, the Cyclones started the season of on a high note, by winning their first two games against non-conference opponents before losing the next 10 games to end the season 2-10.

Dan McCarney was hired as the head coach of the Cyclones in 1995 to replace coach Jim Walden. McCarney coached some of the best athletes to come through the Cyclone program such as Heisman Trophy runner up Troy Davis in in 1996, Cyclones QB Sage Rosenfels in 2000 who went on to have a very successful NFL career. He also coached QB Seneca Wallace and all-American center Ben Bruns.

In 1998, coach McCarney led the Cyclones to victory against hated rival Iowa Hawkeyes that snapped a streak of 15 consecutive losses to the Iowa Hawkeyes. He went on to coach the Cyclones to 5 straight wins over the Hawkeyes. In 2000, coach McCarney took his Cyclones to their first bowl game since 1978 and led his team to the first ever bowl victory in the history of Cyclones football. McCarney brought the Cyclones to 5 consecutive bowl games and won the second ever bowl game in Cyclone history in 2004 when they beat Miami,Ohio 17-13 in the Independence Bowl. The Cyclones won their first ever Big 12-North conference title in 2004 under McCarney. He was one of the most successful coaches in the history of Cyclone football. Dan McCarney was head coach of the Cyclones for 11 years and amassed an overall record of 56-85 and went 43-43 in his last 7 seasons as head coach of the Cyclones.

Earle Bruce was the head coach of the Cyclones from 1973-1978 and amassed an overall record of 36-32 over 6 seasons. After leaving the Cyclones, he was inducted into the Iowa State football hall of fame and later was inducted into the college football hall of fame in 2002. He coached the Cyclones to three consecutive 8 win seasons and had a record of 24-11 from 1976-1978. He was named the Big 8 (Big 12) coach of the year, and led his team to an 8-3 record and a #18 national ranking in 1976. The next year he led the Cyclones to another 8-3 record, and gained a spot in the Peach Bowl, where the Cyclones lost 24-14 to NC State in 1977. He was one of the best coaches for the Cyclones and had coached the most All-Americans ever in Cyclone history.

Johnny Majors (1968 – 1972) – Coach Majors was hired following the 1967 season to replace head coach Clay Stapleton and became the 24th head coach of the Iowa State Cyclones. Johnny Majors was head coach for 5 seasons that spanned from 1968 to 1972 and amassed a total record of 24-30-1. This ranks him 7th in total wins in Cyclone history and 16th in winning percentage. Coach Majors had his most successful season as head coach in 1971, when the Cyclones finished the year with a record of 8-4. They were expected to finish last in the Big 8 but surprised the conference and made it into the 1971 Sun Bowl, where they lost 33-15 to LSU. During his tenure, he coached 3 All-Americans including RB George Amundson who set multiple Iowa State rushing records, and took the Cyclones to 2 bowl games, the 1971 Sun Bowl and the 1972 Liberty Bowl.

Pop Warner (1895-1899) – Pop Warner was the fourth head coach for the Iowa State Cyclones and played a pivotal role in the development of the Cyclone football program. It was under him that college football in Iowa State really took off. It was under Pop Warner that the Iowa State Cyclones name was changed from the Cardinals to the Cyclones after his team beat the Northwestern Wildcats 36-0. The media made a comparison to the performance of the Cyclones, and the very active tornado “Cyclone” season in newspaper headlines, saying that the Wildcats might as well have played the Cyclones, forever changing the team name to the Iowa State Cyclones. Coach Warner amassed an overall record of 18-8 while coaching the Cyclones. Pop also coached at the University of Georgia, Cornell, Pittsburgh, and many more in his lifetime as head coach. Coach Warner’s overall NCAA record was 337-114-32 and won 3 national titles in 1916,1918, and 1926.

The Iowa State Cyclones’ most heated rivalry is an in-state rivalry with the University of Iowa Hawkeyes and dates back to the beginning of Cyclone collegiate football.  There is a trophy called the Cy-Hawk Trophy that is awarded to the winner of the annual Iowa Vs. Iowa State game that year. The Cy-Hawk Trophy was first presented in 1977 when the Des Moines Athletic club donated a trophy for the winner of the rivalry game. Since the emergence of the trophy, the rivalry has become ever so heated and the two teams like nothing more than winning the rivalry. Currently the Hawkeyes lead the Cyclones in the overall series 22-11 in games won, and the Hawkeyes put together a 15 game win streak in their head to head match ups that started in 1973 and the Hawks didn’t lose again until 1997. In the last ten years, the two teams are 5-5 against each other and the Hawkeyes won the most recent match 35-3 at Jack Trice Stadium on September 12, 2009. 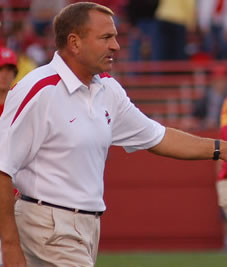 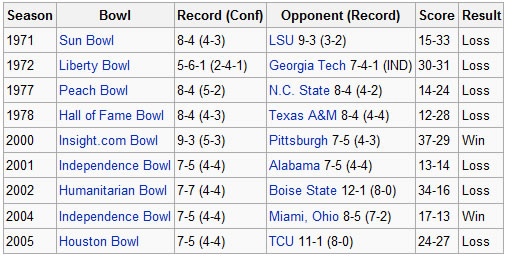