In Monday’s Des Moines register Missouri head coach Gary (Tinkel) Pinkel was quoted as saying “I just got a call from the (Big 12) conference office and Walt Anderson. He said that they clearly made a mistake on that play where (quarterback) Chase Daniel scored. He said to me, ‘We blew it.’ ”

He was referring to the 2 yard touchdown run that put the Tigers up 22-21 with 20 seconds left in the game this past Saturday at Jack Trice Stadium. Pinkel was visibly upset after offensive lineman Myron Wyrick was called for a holding penalty which nullified the TD. “I’ve been coaching 30 years, and I’ve never seen an offensive holding call inside the 2-yard line on a run play,” Pinkel said after the game.

What’s that? In 30 years of coaching you’ve never seen what? Well open your eyes and get a load of this… 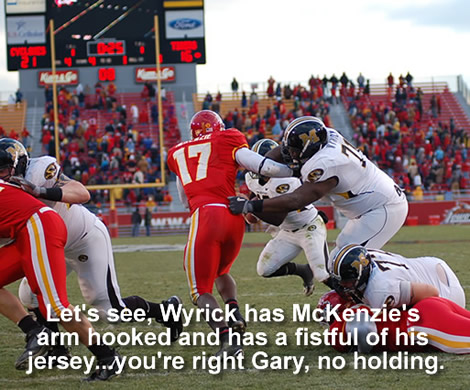 “I watched the same tape,” McCarney said. “If an offensive lineman impedes the progress of a defender from making a play . . . I think it was a good call. It wasn’t like: ‘Here, let’s take care of Mac after 12 years in the Big 12.’”

“Holding is holding, grabbing is grabbing regardless where you are on the field. I watched the tape and I saw a hold.”

Well, I took the picture and I saw a hold too Mac. I’m not sure why the Big 12 office feels they need to apologize for apparently ‘blowing it’, when they didn’t. Maybe it saves them time if they just apologize for the calls they get right. 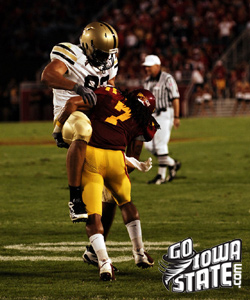