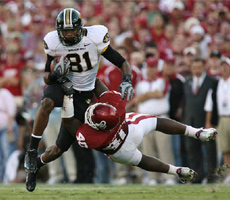 1. Senior WR Danario Alexander is coming off back-to-back 200 yard games and was Big 12 Offensive Player of the Week the last two weeks.  Alexander has 81 receptions for 1,238 yards and 11 touchdowns.

2. Missouri has won 5 of the last 6 games against Iowa State.

3. Starting WR jared Perry is out the remainder of the regular season with a right leg fracture.  Sophomore Jerrell Jackson will take his place in the line up.

4. QB Blaine Gabbert is playing well now that his ankle is closer to 100% healthy.  Gabbert has thrown for 2,662 yards and 20 touchdowns this year.

5. Freshman DE Aldon Smith has 10 sacks which is good for 8th nationally and 4th in the Big 12.

6. Missouri leads the Big 12 and is fifth in the nation in net punting with a 40 yard average.

7. The Tigers will give up some yards and points through the air.  Baylor Freshman QB Nick Florence threw for 427 yards and 3 touchdowns two weeks ago in Columbia.

9. Sean Weatherspoon has 93 tackles on the year good for 2nd in the Big 12 conference. 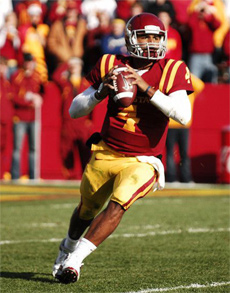 2. The Cyclones are bowl eligible for the first time since 2005.  Iowa State needs a win this week to guarantee a bowl game.

3. ISU is +7 in turnover margin, which ties Texas for tops in the conference.

4. The Cyclones give up 403 yards/game on defense which is 11th in the conference.  However, the Cyclones are 5th in scoring defense giving up just 22 points a contest.  Iowa State has kept points off the board with excellent red zone defense.

5. Iowa State made it through the Colorado game without any new injuries on offense and all key offensive players (Austen Arnaud, Alexander Robinson and Reggie Stephens) should be as healthy as they have been in some time.

6. Senior Jesse Smith leads the conference in tackles with 117 stops.

7. Iowa State is second in sacks allowed in the conference. On the other side of the ball ISU is getting very little pressure on quarterbacks, with the least number of sacks in the Big 12.

1. Offensive Production – You have heard it repeated by Iowa State players and coaches all week, 17 points is not enough to beat Missouri.  Cyclone fans are waiting for the Cyclone passing game to start clicking like it did early in Big 12 play against Kansas and Baylor.  ISU needs it best game throwing the football to leave Columbia with a victory.

2. Contain Danario – Danario Alexander has been absolutely sick the last three weeks with 31 catches, 537 yards and 6 TD.  The Cyclones won’t be able to completely shut him down, but they need to limit his big plays.  With Jared Perry out it should allow Iowa State to keep an extra eye on Alexander.

3. Red Zone Defense – Iowa State has given up yards all year and I expect Missouri to pile up yards as well.  Iowa State wins when they play well in the red zone.  If ISU can force Mizzou into field goals instead of touchdowns and come up with a couple of turnovers they should be in good shape. 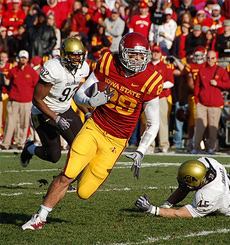 Keep an eye on Collin Franklin this week

1. Austen Arnaud – Austen is overdue for a breakout game in Tom Herman’s offense.  The Tigers defense has given up big numbers to conference quarterbacks.  Iowa State has to have a big game from Austen to have a chance.

2. Kennard Banks – I am guessing KB is going to be lined up across Danario Alexander for most of the game.  What a great opportunity for the Senior to show off his skills againt one of the top WR in America.

3. Collin Franklin – Franklin has shown off his soft hands and ability to run after the catch the last two weeks.  It is time to get him more involved in the offense.

The Tigers have played better on the road in conference games and are still searching for their first Big 12 win at home.  Mizzou has dropped games to Nebraska, Baylor and Texas in Columbia.    Missouri played their best game last week in 38-12 win over Kansas State in Manhattan.  The offense is coming on strong with a healthy Blaine Gabbert and a man possessed, Danario Alexander.

Iowa State has won it’s three Big 12 games by keeping the games low scoring, opponents have scored 10 points or less and getting at least 3 turnovers.  That formula won’t work this week as Missouri is going to put some points on the board.  So the question is can Iowa State put twenty-some points on the board?  It is definitely possible, but I will need to see it to believe it.  Iowa State needs to come out attacking a vulnerable Missouri secondary from the first whistle or they won’t stand a chance.

The Cyclones need a win to guarantee a bowl trip and they will be hungry to get the victory.  Unfortunately, Missouri has too much on offense and Iowa State is still trying to regain its rhythm on offense. 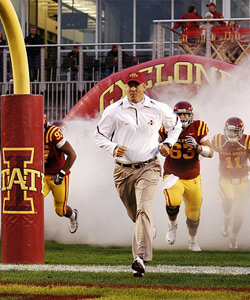