« Previous Next »
Browse: Home / From the Middle – Week 10 Analysis

From the Middle – Week 10 Analysis

The Cyclone offense welcomed the return of Alexander Robinson to the lineup as he ran for 76 yards on twenty attempts.  It was nice to see him in the line-up again and his return definitely provided a spark to the offense.  He will once again need to be 100% if we are to have a chance against a very good Oklahoma State defense.  The Cowboys have given up some yards and points this year, and we will need to produce yards on the ground to have a chance at winning. 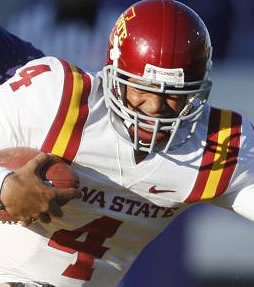 Jerome Tiller has done a nice job of filling in for Austen Arnaud, but it is apparent that we miss Austen’s productivity for the Cyclones.  Over the last two weeks, the Cyclone offense has had to cut down on the number of plays they are able to run.  With Austen coming back to the line-up this week, it should allow us to give the Cowboys a number of different formations and plays we have not been able to run in previous weeks.  I am looking forward to a boost in the productivity of the offense with Austen’s return.

The Cyclone defense ran into a very potent offense from Texas A&M and it showed in the score and the number of yards the defense gave up.  Jerrod Johnson had his way against the Cyclone secondary as he passed for 234 yards.  He also was very efficient as he completed 23 out of 28 attempts.  The Cyclones were missing James Smith in the secondary for the 1st half of the game due to a suspension from an altercation in the Nebraska game.  Overall, I would grade there effort as a C for the week.  They were not able to stop the Aggies from sustaining long drives and did not stop a number of big plays that lead to points.  This week against the Cowboys offense, they will need to be clicking on all cylinders to have a shot of winning.

Keys to Victory against Oklahoma State 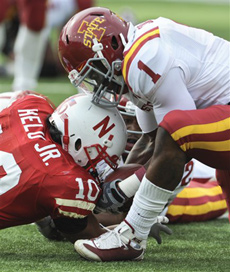 1)      Austen’s return to the line-up is big for us this week.  He will need to show that his throwing hand is completely healed and there is no rust from his time off.

2)      Defense will need to have a good game against the Cowboys.  They need to continue their trend of creating at least 1 turnover a game.

3)      Hate to sound like a broken record, but….Kicking game needs to improve.

4)      The return of Reggie Stephens to the line-up could be a big boost to the team.  We really missed him in the line-up last week , Reggie missed last week due to appendectomy surgery.

Well, that is it for this week!  Up next a breakdown of the Oklahoma State game!