Several juco newcomers should have an impact on the Cyclones 2011 football season.   The group is headlined by Steele Jantz, and includes five players signed this year and four others that redshirted last year. 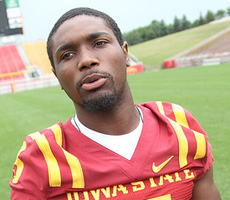 Steele Jantz and Aaron Horne hope to bring their big play ability to the Big 12 this year.

1. QB Steele Jantz #2 (6-3, 224) – Steele will start under center after winning the quarterback competition this fall.  He is a big, mobile QB with a strong, accurate arm.  Jantz wowed Cyclone fans with a touchdown pass at the Spring Game, it was a perfectly placed deep ball to his former Juco teammate Aaron Horne.  He continued to throw accurate long balls in scrimmages this fall, let’s hope he makes similar plays this season.

2. WR Aaron Horne #3 (5-9, 175) – Horne should have good chemistry with Jantz after the pair hooked up for 1,176 yards and 12 touchdowns at San Francisco City College last year.  The Cyclones need big play receivers and Aaron appears to have that ability.  Had 8 catches for 124 yards, including the 50 yard TD reception from Jantz in the Spring Game, He also scored on a 16-yard reverse.

3. DE Rony Nelson #31 (6-1, 248) – Nelson, who is coming off a redshirt, has been a pleasant surprise this fall.  The Cyclones are fairly deep at defensive end this year, with at least 5 guys expected to see action.  Rony’s strength is rushing the passer so he should see some snaps in third and long situations.

4. TE Ernst Brun #84 (6-3, 222) – Ernst is currently the third TE for Iowa State and could be a factor in the passing game.  His playing time will see an uptick with the loss of Ricky Howard for the season.

6. WR Chris Young #15 (5-11, 197) – Another guy coming off a redshirt.  Missed some time at fall camp, but is still listed as a two on the depth chart.  Will have to fight fast-rising freshmen Quenton Bundrage and JQ Daniels for playing time.

8. DT Henry Simon #98 (6-3, 302) – Finally made it on campus this week and will start practicing today.  It will most likely take him some time to get in to football shape, but he could contribute later in the year.

9. DT Jon Caspers #57 (6-5, 277) – Caspers was moved from offensive line to defensive line to provide depth to a dinged up unit.  Not likely to see playing time this year. 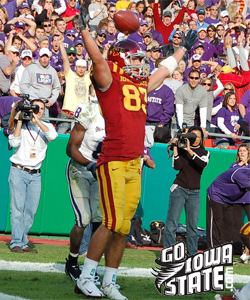