Iowa State redshirted several talented freshman last season.  We expect many of them to be key contributors this year, led by Tom Farniok who will take over at Center. 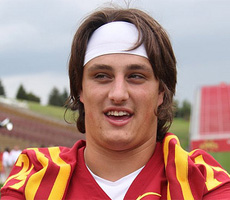 1. OL Tom Farniok #74 (6-3, 280) – Coach Rhoads has been singing Tom’s praises since late last year.  Iowa State brought in a Juco (Sam Tautolo) to compete at Center, but Farniok has solidified the spot with his impressive play this fall.   Tom should be the anchor of the offensive line for many years to come.

2. LB CJ Morgan #27 (6-2, 207) –  Wally Burnham said at this time last year that CJ Morgan was the linebacker that was most ready to see the field and true to form it looks like he will be the first to see action.  He is currently listed as the starter at SLB.  CJ is currently a little undersized, but he can really move and he packs a punch when he hits.

3. WR Jarvis West #1 (5-7, 164) – Jarvis most likely would have played last year if it wasn’t for an injury he had late in camp.  He has the ability to take a short pass and turn it in to a big play.  West has been battling a hand/wrist injury in camp this year.

4. CB Matthew Thomas #8 (5-9, 168) –  Matt should see action as the third or fourth cornerback.  Paul Rhoads mentioned last year that Thomas is one of the fastest players on the team.

6. LB Floyd Mattison #19 (5-10, 203) – Mattison should see plenty of time on special teams units and provide depth at linebacker for the Cyclones.

7. QB Jared Barnett #16 (6-0, 200) – Made huge strides in the last year.  Was in the mix for the starting position through spring and into fall camp.  Steele will be given every opportunity to keep the starting role, but the coaches are very comfortable with Barnett backing him up.

8. DL Brandon Jensen #93 (6-4, 276) – The defensive line has been dinged up in camp, which has given Brandon a lot of reps with the ones and twos.  It will be interesting to see if he is a part of the rotation on the defensive line when the season begins.