Before the season started we assembled a list of 10 attainable goals for Cyclone football in 2010.   We thought it would be fun to take a look back and see how many of the goals were achieved.  The Cyclones ended up achieving 4 of the 10 goals. 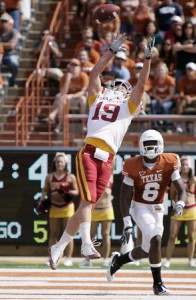 FAILED – The Arrowhead experiment didn’t turn out well for Iowa State.  The Cyclones dropped two close games to the Wildcats in Kansas City.  I really believe ISU wins one of these games if it was played at home.

GOAL ACHIEVED – Iowa State shocked the country when they went to Austin and dropped the #19 Texas Longhorns 28-21.  Texas went into a tailspin after the loss, but it was the first win ever for ISU over Texas and probably the Cyclones most impressive win of the year.

FAILED – Iowa State went 3-5 for the second year in a row.  The Cyclones were close to achieving their goal with narrow losses to Nebraska and Kansas State.

GOAL ACHIEVED – Iowa State beat Texas when they were ranked #19 in the country. Northern Illinois finished just outside of the Top 25.

FAILED – The Cyclones were 2-2 with wins over Northern Illinois and Northern Iowa.  Iowa State was blown out by Iowa and Utah in the other two games.

FAILED – This is the one that hurts the most.  Again the Kansas State and Nebraska losses really stick out and ISU couldn’t get it done in the final game against Mizzou.

FAILED – Can’t win a game you never made it to.

FAILED –  It seems far fetched looking at this goal now, but with 3 games remaining Iowa State controlled it’s own destiny in the North.  Complete the 2 point conversion against Nebraska and who knows what would have happened.

GOAL ACHIEVED – I honestly thought achieving this goal was a long shot before the season, but the Cyclones checked this one off the list.  Iowa State has now beat every team in the Big 12…..and it feels good to say that.

One response to “2010 Iowa State Football Season Review – Which Goals Were Achieved?” 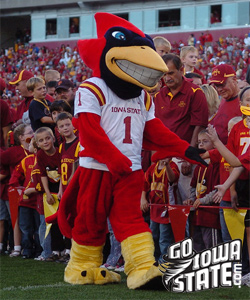